[jbox color=”white”][mp3t track=”2015-04-19-uma-majmudar-swami-vivekananda-and-mahatma-gandhi-truth-is-one-paths-are-diverse.mp3″ play=”Listen Now -” stop=”Pause -” title=”"Swami Vivekananda and Mahatma Gandhi:
Truth is One, Paths are Diverse" – Uma Majmudar”]
Or download the MP3 to your computer, and listen offline.
To move forward/backward through the talk, slide the gray bar that appears once audio is playing. 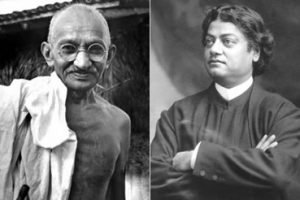 Swami Vivekananda and Mahatma Gandhi were two great sons of Mother India and also contemporaries; Vivekananda was a Jnanayogi, whereas Gandhi, was a Karmayogi.

Though their personalities and paths differed, they were brothers in spirit with a similar mission to realize God as Truth. Both yearned to see God in the faces of the poor and believed in serving the poor as “Daridra-Narayana” (daridra: poor, and Narayana: God).

In this talk we examine their backgrounds, their religious views and their supreme contribution to the humanity-at-large.

What does relationship mean to a spiritual seeker? – Br. Shankara

What Deserves My Attention? – Br. Shankara