[jbox color=”white”][mp3t track=”2014-02-09-shankara-naren-and-rakhal-two-unbroken-hearts.mp3″ play=”Listen Now -” stop=”Pause -” title=”"Naren and Rakhal – Two Unbroken Hearts" – Br. Shankara”]
Or download the MP3 to your computer, and listen offline.
To move forward/backward through the talk, slide the gray bar that appears once audio is playing. 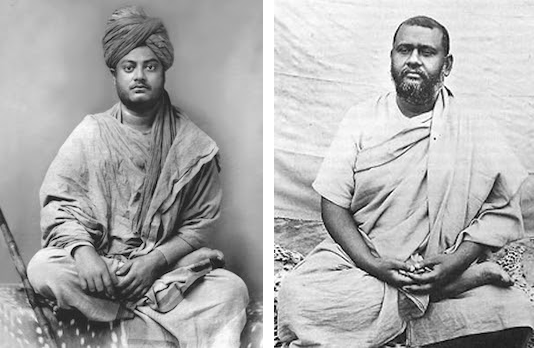 Swami Vivekananda (Naren), writing from the U.S. in the late 1890s, addressed Swami Brahmananda (Rakhal), as “My one unbroken heart…” Was this not the sheet calling the pillowcase white?

Narendranath Dutta and Rakhal Ghosh became the axles of the machine Sri Ramakrishna built to carry his work forward: Two men of entirely different natures, destined and trained for two very specific tasks. When they were done, the result was the Ramakrishna Order of India, an extraordinary band of monks and nuns.

Key premise of this talk: All of us — even Divine Incarnations and their closest disciples — are to a great extent, shaped by the environment into which we are born. So, what gave rise to the India — especially the Bengal — into which Naren and Rakhal arrived, within nine days of one another, in January 1863? And how did that culture, a clash of the modern and the ancient, the materialistic and the spiritual, inflect these two great personalities as they grew from boyhood to manhood in Calcutta, the capital city of the British Raj?