[jbox color=”white”][mp3t track=”2016-09-04-br-shankara-finding-reverence.mp3″ play=”Listen Now -” stop=”Pause -” title=”"Finding Reverence" – Br. Shankara”]
Or download the MP3 to your computer, and listen offline.
To move forward/backward through the talk, slide the gray bar that appears once audio is playing. 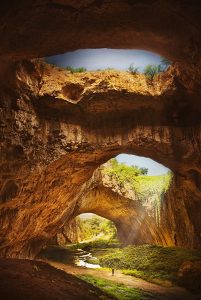 September is a month for study of Bhakti Yoga — the cultivation of a devotional relationship with God through prayer, ritual, and worship. In this practice, our thoughts, emotions and tendencies are given “a Godward turn.” A bhakti yogi (bhakta) uses every available energy and attribute in his or her quest for spiritual fulfillment.

Perhaps you, like Prince Hamlet, may come to feel,  “How weary, stale, flat, and unprofitable seem to me all the uses of this world!” — Hamlet, Act 1, Scene 2

What will you do? Often, in such a time of dejection and discontent, something totally outside your normal way of living will seize your attention. For one woman, it was a car speeding through a crosswalk that missed her by less than 6 inches. For another, it was standing on a forest floor among giant sequoia redwood trees, suddenly being truly overwhelmed by their age, their majesty and splendor.

The first was barely spared from death; the second given an entirely new sense of life. For both, it was a life-changing moment, the effects of which lasted for weeks. During those weeks, their gratitude and awe became reverence, and a strong desire to penetrate the mystery of what had happened to them. This yearning led them to explanations offered by the great teachers of religion, and to a life of daily spiritual practice.

In this talk, we explore reverence and its role in the dawning of a God- or Truth-centered life.

Karma Yoga and the 3 Gunas: A Samkhya Primer – Br. Shankara

Raja Yoga and the Personal Ideal of God – Br. Shankara