[jbox color=”white”][mp3t track=”2017-04-09-br-shankara-adi-shankaracharyas-jnana-yoga.mp3″ play=”Listen Now -” stop=”Pause -” title=”"Adi Shankaracharya’s Jnana Yoga" – Br. Shankara”]
Or download the MP3 to your computer, and listen offline.
To move forward/backward through the talk, slide the gray bar that appears once audio is playing. 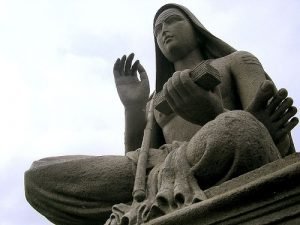 April is a month for the study of Jnana Yoga, an path to realization that requires analysis, discrimination, reason, and constant devotion to your goal. Your aim is liberation, freedom from all limitation.

Vedanta’s scriptures and teachers tell us that life’s misery — its pain, anxiety, and sense of imprisonment — is caused by seeing inaccurately, due to “maya.” As a jnana yogi, you may break through that framework of delusion and see only Brahman everywhere, in everything and everyone, including yourself. This is realization!

Adi Shankaracharya (Shankara) was a great sage of medieval India (788-820 CE). Though only 32 at his death, he wrote highly revered interpretations of many traditional Hindu scriptures, including the Upanishads and Vedantic texts. Shankara also left us books of instruction such as Vivekachudamani (Crest Jewel of Discrimination). His efforts, including a renowned ability to defeat leaders of other philosophical schools in debate, helped restore Advaita Vedanta (non-dualism) to prominence in Hinduism’s Perennial Philosophy (Sanatana Dharma).

In this talk we explore and discuss two practices that are central to Shankara’s teachings: viveka (discrimination between the unreal and the real), and vairagya (release of worldly desires and attachments).

Shankara says that — with sustained attention — discrimination and release will certainly lead an aspirant forward in spiritual life. And so, at last, to realization and life as a jivanmukta (one who is liberated while still embodied).

Thou Shining Everything Shines – Br. Shankara

It Truly Is A Divine Life – Swami Sarvadevananda