[jbox color=”white”][mp3t track=”2014-05-11-john-schlenck-worshiping-the-divine-mother-through-music.mp3″ play=”Listen Now -” stop=”Pause -” title=”"Worshiping the Divine Mother through Music" – John Schlenck”]
Or download the MP3 to your computer, and listen offline.
To move forward/backward through the talk, slide the gray bar that appears once audio is playing. 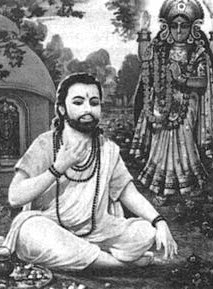 Music is an integral part of all religious traditions. The songs of poet devotees and saints often express profound religious devotion, and God-realization.

Sri Ramakrishna was born into a rich culture of devotional music. When he moved to Kolkata, living and worshiping in a temple dedicated to the Divine Mother Kali, he began singing songs to Her. He especially liked the compositions of Ramprasad, an 18th C. Bengali poet and saint — Ramprasad’s songs express an intimate, childlike relationship with the Divine Mother. Ramakrishna would pray to Mother Kali, “O Ma, You revealed yourself to Ramprasad, why not to me?”

In this discourse, our Resident Composer John Schlenck speaks on “Worshiping the Divine Mother through Music,” singing part of several songs to illuminate his talk.