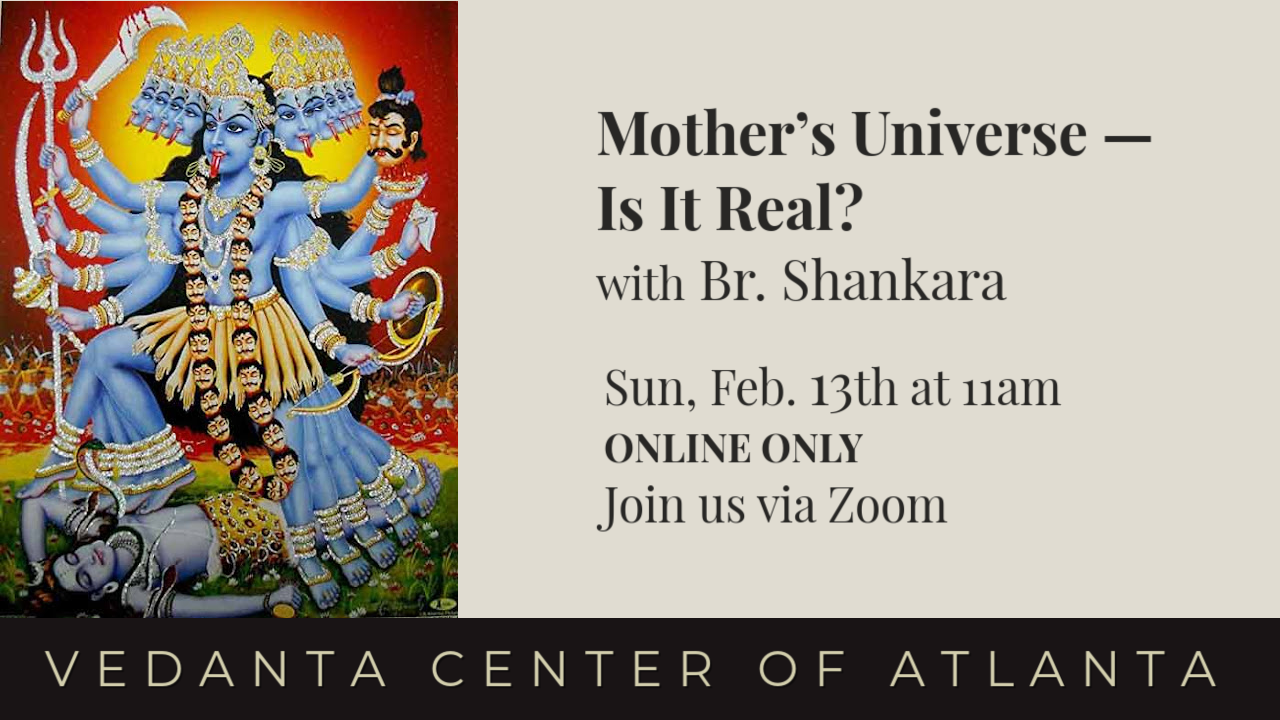 Sunday Talk: Mother’s Universe — Is It Real?, with Br. Shankara

Click here to join us via Zoom and participate in the discussion!

On Sunday morning, Feb. 13th at 11am, Br. Shankara will give a talk entitled Mother’s Universe — Is It Real?

February is a month for study of Bhakti Yoga. A bhakti yogi (bhakta) establishes a devotional relationship with God through study, prayer, ritual, and worship. This often begins with a feeling of reverence or awe, which may slowly grow into a conviction that everything, without exception, manifests God’s power and grace.

As a bhakta, you practice giving every action, thought, emotion, perception and tendency “a Godward turn.” All your energies and attributes, both positive and negative, are offered to the Divine Presence. Your prayer is for self-surrender and, ultimately, union with your Belovéd.

Swami Vivekananda said, “You see, I cannot but believe that there is somewhere a great Power that thinks of Herself as feminine, and called Kali and Mother. . .”

And here’s what the Devi Mahatmyam (700 Verses in Praise of Mother Durga — a scripture written for those who worship the Divine Feminine) tells us:

Brahma said, “By you this universe is born, by you this world is created. By you it is protected, O Devi and you always consume it at the end.

You are indeed the supreme Isvari, beyond the high and low. And whatever or wherever a thing exists, conscient (real) or non-conscient (unreal), whatever power all that possesses is yourself …”

So, is the universe you perceive, in your embodied form, really “out there” — at your fingertips, so to speak? Is it a reality made of Mother’s matter and energy, that your five senses grasp and correctly interpret?

Or is it a projection you’ve learned to construct, based on sensory and super-sensory stimulation, memory, and other information?

That’s what we’ll explore and discuss this Sunday morning.