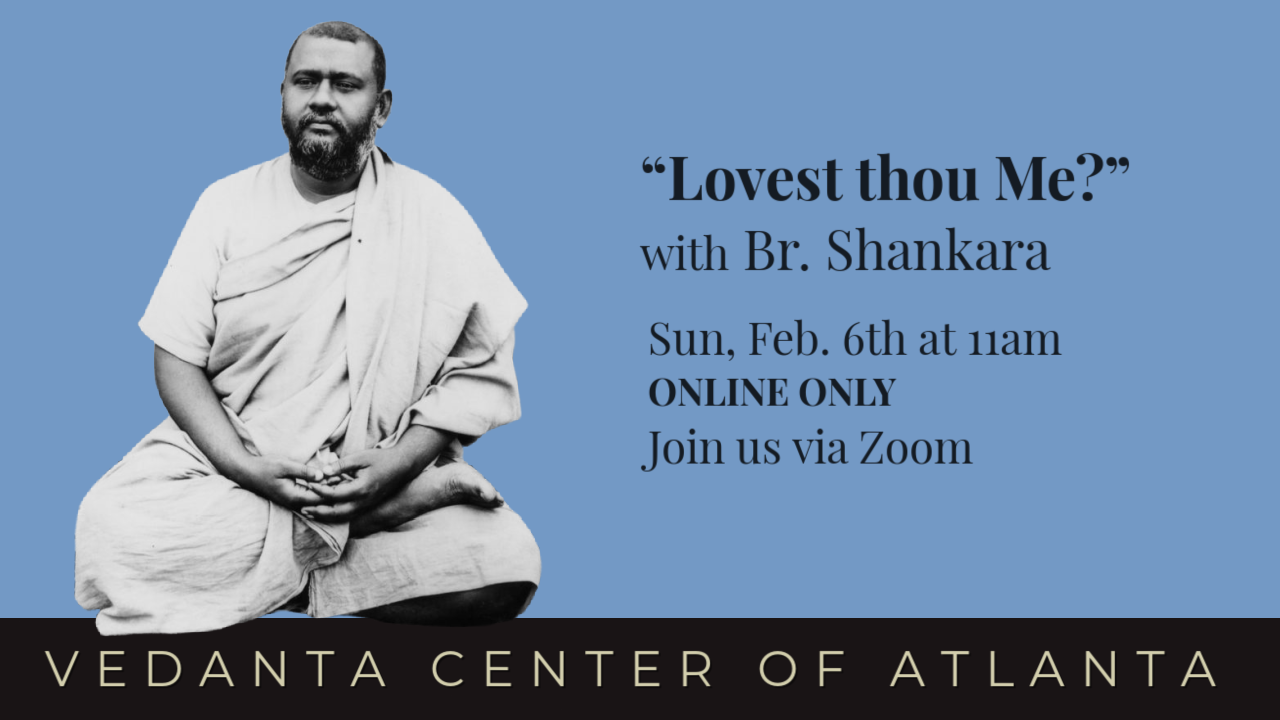 Sunday Talk: Lovest thou Me?, with Br. Shankara

Click here to join us via Zoom and participate in the discussion!

On Sunday morning, Feb. 6th at 11am, Br. Shankara will give a talk entitled “Lovest thou Me?”

February is a month for study of Bhakti Yoga. A bhakti yogi (bhakta) establishes a devotional relationship with God through study, prayer, ritual, and worship. This often begins with a feeling of reverence or awe, which may slowly grow into a conviction that everything, without exception, manifests God’s power and grace.

As a bhakta, you practice giving every action, thought, emotion, perception and tendency “a Godward turn.” All your energies and attributes, both positive and negative, are offered to the Divine Presence. Your prayer is for self-surrender and, ultimately, union with your Belovéd.

One day Swami Prabhavananda was arranging flowers in Raja Maharaj’s room. Maharaj came quietly up behind him and whispered in his ear, “Lovest thou me?”

At that moment, Prabhavananda became ecstatic. Later, over time, he came to understand the meaning of Maharaj’s gesture — that he too was being called on to feed the Lord’s sheep. Raja Maharaj, his guru, was Swami Brahmananda, the first President of the Ramakrishna Math and Mission. Swami Prabhavananda would go on to found the Vedanta Society of Southern California (VSSC), the largest of the Mission’s centers outside of India.

Swami Prabhavananda would never take any credit for the VSSC’s great success. He said it was all due to the power and grace of Raja Maharaj.

Maharaj was born Rakhal Chandra Ghosh on January 21, 1863. He became Sri Ramakrishna’s disciple in 1881; the Master called Rakhal his spiritual son. Maharaj’s lunar calendar birthday falls this year on February 8 — we will celebrate his birth this coming Sunday, February 6th, with a talk on his life and achievements, and an informal worship service. Please join us on Zoom at 11am Eastern Standard Time.